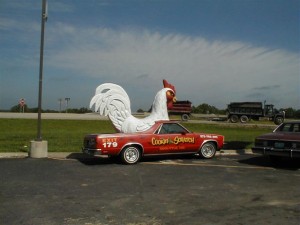 When I was in college, there was this Gas Station/Restaurant just west of Rolla, Missouri on I-44 we called the “Chicken Gas Station”. It was usually a welcome sight, as it was approximately the halfway point from St. Louis to the college I attended.

They advertised their “pan-fried chicken” far and wide in billboards, signs, and the picture in this post. They had built a reputation, based on what they did. I never ate there, but if you mentioned the name of the restaurant,  I would immediately reply with “pan-fried chicken” based on 7+ years of traveling past it and all the advertisements on I-44.

When people mention the name of your church, is their first reply Jesus? If not, it sounds like you have some work to do…