First things first.
I am a member of the generation that sees the “Christian Subculture” we created during the 80’s and 90’s as silly at best, greedy at worst. Now we can move on… 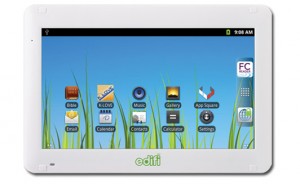 It seems that Family Christian Stores has made a number of the leading tech blogs this morning by releasing a “Christian Tablet” called the Edify. Ok, I’ll bite and have that conversation for you..

What makes the tablet “Christian”? The Christian apps.
Like what? The Bible, K-Love, and a Safe Search.
Wait. I have all those free apps on my “Non-Christian” Tablet. I downloaded them from the Google Market. You could just do that too, right? Well,,, Our tablet doesn’t have access to all that junk Google puts out. We have our own “Christian” market app.

From there, it would just get more ridiculous.

The cost is $149. A little high, especially considering that Meijers sells the Cydle M7 (the “un-Christian” version of this hardware) for $129 here. This tablet was originally built in 2010, which in technology time equals ancient.

The hardware was kind of OK on the M7 in 2010, but mid-2012 is another story. It has a single core 800mhz CPU, with 8GB Storage, and 512MB of Ram with a Resistive Screen (This will be better suited to stylus than finger…) 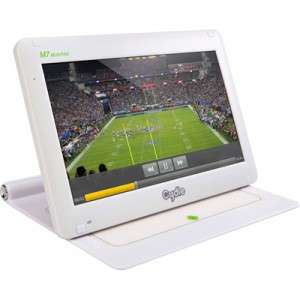 Here is where the rub for me comes in. We are called to be excellent in all we do as Christians. I have no issue when a Christian person or company brings to market a new, innovative idea that is at the top of its industry. That is what we should do (reminds me of Romans 16:19). We should not settle for rehashing or ripping off other ideas, and bringing them to market as a substandard product, just to call them a “Christian” product (don’t get me started on logo parody T-Shirts). This harms the reputation of Christians as a whole.

I am not one to offer constructive criticism without offering a solution or two, so here are my suggestions:

1. Spend a little more and get a lot more. A Nexus 7 is $199 for a lot better tablet that will run all those apps, plus many more – a lot better. You have a lot newer OS, support from Google, and an upgrade path when updates are released. There is also a new Kindle Fire coming that will be in this price range as well, with Amazon’s App Ecosystem.

2. If the money really is an issue, but you have a little know-how, A Kindle Fire or Nook tablet can be had as a refurb for around $149, and can be modified to run Android 4.0 (ICS) an make a nice little tablet. (That’s what I did)

So that is my take. I hope you learned something. Slapping a Christian label on something doesn’t automatically make it great or worthy of the dollars God has blessed you with.