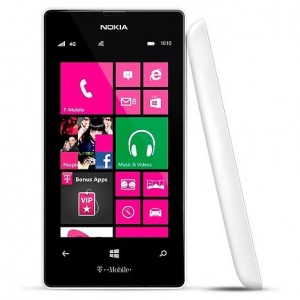 There are a lot of options available with smartphones. they are becoming cheaper and cheaper every day. With a lot of carriers, you can now get a smartphone for free on contract. But what if you want to go the no-contract route? Or what if you need to replace a lost or broken phone and don’t want to deal with “sketchy” Craigslist or eBay deals?

The  two entry price points used to be the $199 and $299 if its a smartphone with mid-range or better specifications. If you would have told me a year ago that you could get a decent mid-range smartphone for $129, I would have said you were crazy. Leave it to Walmart, Nokia, and T-Mobile to make crazy happen.

I happen to have T-Mobile service on contract, and picked one of these up the other day. I can tell you that the phone is very usable. Windows Phone 8 seems to be a very lightweight OS, considering the hardware specs of the Lumia 521.

Here are some of my initial thoughts:

1) Battery life is quite good. Coming from a Dual-Core Android Jellybean beast of a phone, the trade-off was always battery life. This phone seems to do everything I ask of it with a 1Ghz, Single core processor.

2) The screen is surprisingly good for a $129 phone. If you doubled the price, I would still say the screen was good for that price. Nokia did well here. No washed out colors, good response, and sharp text. Its not an iPhone Retina screen, but it is easy on the eyes.

3) The camera is serviceable. A lot of smartphones today are coming with 8MP and up cameras. This comes with a 5MP. It does an ok job, given that you realize that 10×13 prints are probably out of the conversation. I would put it on par with the 5MP (estimated) that they put in the iPhone 4. This is one area that it they could have improved, and kept the price under $150 or so, would have been amazing.

4) The Windows Phone 8 OS is a large improvement over the last version. I had a early phone with Windows Phone 7. I wanted WP7 to be amazing. I did. There were just so many odd things missing, that it seemed like an incomplete project. WP8 finished a lot of that. It seems like a much smoother experience. Nokia did an excellent job on the mapping software with the HERE suite. Most apps I used on iOS or Android are there (or equivalents that work well). The social media integration is well done. The mail software works well with GMail.

If you had to replace your phone for cheap. what would be your choice? Put your thoughts in the comments below