So then neither the one who plants nor the one who waters is anything, but God who causes the growth. Now he who plants and he who waters are one; but each will receive his own reward according to his own labor. – 1 Corinthians 3:7-8 ESV
I was part of a lot of years of planting seasons as a kid and teenager. Want to know what my least favorite thing to plant was? STUBBLE CLOVER. I did not like planting it, almost as much as didn’t care for square baling it. 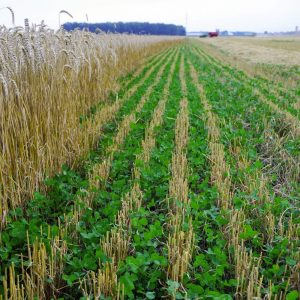 No, on second thought baling stubble clover hay was really terrible, miserable, hot, dirty work.
You plant stubble clover to grow in the wheat fields at a rate slower than the winter wheat you planted in the fall. You typically plant stubble clover in April or early May in Southern Illinois. When the wheat is maybe 6 inches tall at most. Right after spring rains. You hope you aren’t walking in mud. You might be. And yes, you walk because its generally too wet to use equipment. And when you have kids at home…
To plant the seed, you use this seed bag with a tube at the bottom and walk the length of the field swinging the tube back and forth slinging seed all over the place. Then you refill the bag and do it again. Until you have walked the whole field.

After you have harvested the wheat, the clover will ready to be baled in a few weeks, right in the heat of the summer. 80+ Degrees outside and 80% plus humidity typically seemed to be the rule of what the weather was supposed to be like when it was time to bale the clover.
In this illustration, I can see reaching a small community in today’s society. A lot of slinging  grace and love around not knowing what will grow and what won’t. I see a lot of going into the world where other ideas have taken root for a while. Then I see families after they have realized the world isn’t what they thought, Then tending these shoots that have come up in the stubble of the world. They see the love and grace we have shown took root, grew, and we harvest a soul that is ready to join the Kingdom.
Now go plant some seed!