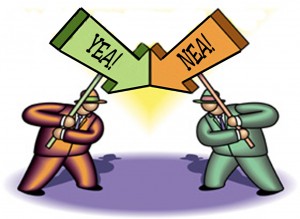 Recently, I read this article about Bart Campolo.  He’s the son of author and preacher Tony Campolo.

I watched his video.  In it, he addresses a secular humanism audience and details his initial conversion to Christianity.  He talks about the need for community.  To paraphrase, the community of Christianity brought him in and welcomed him.  He wanted and needed that, so he joined, even though he didn’t have their faith in Christ.  He implored his secular human audience to create a similar type of community to attract others to the secular humanist way of thinking.

First off, it reminds me how important our Christian community and environment is. Scripture is not always easy to understand, particularly to a non-believing audience.  But love is.  If we love others—as Jesus said we should—we can share with them the truth of the Gospel.  Love builds bridges.  We must take our Christian community seriously. Souls depend on it.

Secondly, I noticed an interesting divide.  Apparently, others are not taking Campolo’s advice.  In the video, he mentions that secular humanists won’t win in an argument.  In fact, I found this true of Christianity too.  Very rarely is someone persuaded to Christianity or anything through a debate.

Yet, in a response to the Christianity Today article, Frank Schaeffer, wrote a scathing piece refuting much of Ed Stetzer’s article.  In the piece, he makes some broad generalities and uses some particularly inflammatory language.  He paints Christians with a broad brush, and attacks Billy Graham, Christianity Today and a host of others.

Here’s my question:  Why?

Why does Frank Shaeffer and others feel the need to prove Christianity wrong?  If they hold the superior view (and I disagree with that), then what’s the need to tear down those of us foolish enough to believe in Christ?

To assume that Christians are weak-minded, brainwashed or just stupid is an insult.  Most of my Christian friends have, at minimum, a college degree.  These are not dumb folks.  I know believers who are doctors, scientists, teachers, principals, administrators, CEOs, entertainers and executives.  My parents have only a high school diploma, but both are very smart people.  They believe in Jesus.

So I reject that simpletons alone believe in Jesus.

But if that’s your belief, why are you arguing?  Why try to convince us foolish people that you’re right?  And why try to vilify us?

I just don’t get it.

And perhaps, as Campolo suggests, that’s why Christianity has more of a following.  We create communities based on love, not engage in endless debates that resort to name-calling.

But what do I know?  I’m just a brainwashed, mindless, dumb Christian.