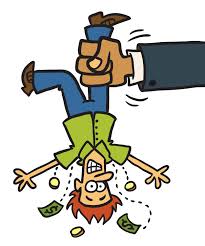 away from MinistryPlace.net for a while.

It was sort of by choice.  You see, I’ve had a lot of changes in the past few months.  We had a new baby.  I moved six hours away.  I started my senior pastor position in Illinois.  I began my work towards my second master’s degree.  I was also working on my second novel.

That doesn’t leave a lot of time for blogging.  So I took a self-imposed sabbath from the site.  I love this place to write and express, so it was never meant to be a permanent departure.  Just a small break to recharge, re-prioritize and reorganize.

Now that things have settled down, I want to get back to blogging here.  Since I’m no longer in youth ministry officially (though I’m not sure anyone ever leaves youth ministry totally), I want to change the focus and voice of my blogs here.

But rest assured, I still come from a small, rural church perspective.

So what’s my first nugget in this new foray.  Just this:  spend your budget.

I had my first budget meeting a few days ago.  We poured over the current budget, expenditures and anticipated budget needs for next year.  As we looked over the budget, we made notations of money not spent that could be allocated elsewhere.

I quickly learned this:  Those that spent their money are likely to receive the same amount or a slight increase next year.  Those that didn’t would likely see a decrease.

That blew my mind.  I had always been taught to stay under budget and run a tight ship.  I did.  In all my years of youth ministry, I can only think of one year we ran over budget, and that was due to an increase of students attending the mission trip.  I thought staying within budget and not spending all your money insured a budget increase down the road.

What I’ve learned, from a strict numbers standpoint is, if you don’t spend your money it might be better allocated to other areas.  The church budget has to cover a lot of ground.  If you’re not using all your money, another ministry that needs money is going to get what you didn’t spend.

So heed this warning:  you have a budget for a reason.  Estimate it as accurately as possible.  Then spend as much of it as you can without going over.  I believe a budget is meant for you to stay within.  I just now believe you should spend right up to the limit.

If you do, you will get that same money.  If not, it may get redirected somewhere else.