Editor’s Note:
This post is in conjunction with the release of Rick’s new book – Skin in The Game. The following is an excerpt… 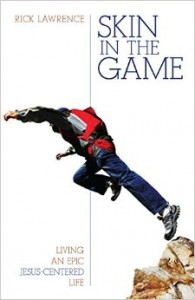 Jesus Wants Your Skin In the Game

There He is again, playing a game of verbal “Battleship” with the Pharisees in the temple court—they take a shot at him, and he fires right back. Jesus has, once again, so grossly offended the teachers of the law that they intend to stone him to death… Typical of His in-your-face style with the teachers of the law, He’s just pulled the pin on this little grenade: “You are of your father the devil, and you want to do the desires of your father. He was a murderer from the beginning, and does not stand in the truth because there is no truth in him” (John 8:44).

John records what happens next with elegant simplicity: “Jesus hid Himself and went out of the temple.” If an angry mob picked up stones, intending to kill you, “hiding yourself” would require a) Harry Potter’s “cloak of invisibility” or b) fast feet. John leaves out the details. This is all merely the prequel to a bigger drama that’s about to unfold…

Likely breathless from his escape, Jesus runs across a man who is blind from birth (John 9). When the disciples catch up, they ask a question that’s quintessentially human: “Rabbi, who sinned, this man or his parents, that he would be born blind?” They want to know why bad things happen to good people—a conundrum that’s fundamental to our life in a broken culture.

“It was neither that this man sinned, nor his parents,” Jesus replies, “but it was so that the works of God might be displayed in him.” Then, without permission or hesitation—or, it has to be said, apparent rationality—the Master spits on the ground, fashions a little clay, then smears it all over the man’s eyes and face.

As shocking as all of this must have been for a blind man who’s suddenly been sucked into a big moment, the next words out of Jesus’ mouth must have seemed no less astonishing: “Go, wash in the pool of Siloam” (John 9:1–7). The pool is on the other side of town, a long trek away. And this man has just been told to walk there on his own. Still blind, his eyes smeared with spit and mud, he’s supposed to find his way to a specific pool where he can wash his face. If he can find the place…

Why would Jesus ask this man to do something that will so obviously require him to take a great risk?

Why, when He has healed multitudes with a simple touch, does Jesus ask the man to jump through hoops in order to find his freedom?

It makes no sense—unless Jesus wants the man to put his skin in the game.

Risk, Jesus says, is our primary language for communicating the great works of God. And when the man offers his skin in the game, he’s really setting the stage for God to be known and worshiped.

The blind man is used to poor treatment, and getting clay smeared on his eyes smacks of same-old, same-old. So why should he obey Jesus’ bizarre instructions, after an equally bizarre and inexplicable act of apparent disrespect? We don’t know the calculus going on inside the man’s head, but we do know his response. He accepts Jesus’ challenge and finds his way to the pool of Siloam, where he washes the clay from his eyes—and then runs back through town to declare the impossible: He can see! For the first time in his life, he can see!

We may not like the hard edge of risk, but Jesus requires it of those who would wash away their blindness. And so, we must consider the dimensions of the man’s risk, and our own, because our courage is proportionate to its impediments. Like the man born blind, we’ve heard an Accuser’s voice our whole life, planting lies in our soul.

On a men’s retreat a couple of years ago, my friend Bob Krulish asked a group of sixty gathered in a mountain auditorium to answer this simple question: “What’s one lie you are right now believing about yourself?” Here’s a sampler of their anonymous responses:

I’m not really desired by my wife

If you really knew me, you’d reject me (listed multiple times).

I’m not worthy or capable of success.

My life isn’t worth much or special.

I don’t have what it takes

I can do it all by myself—don’t need others.

There is something wrong with me.

What about the man born blind, with mud smeared on his beaten and weathered face? His own interior collection of lies may well be legion—a toxic stew of the entire bulleted list. But he chooses to risk anyway, stumbling his way through town, past the averted eyes of others, all the way to Siloam and a miracle that exceeds his deepest hopes. For the man is about to gain more than his eyesight alone. His newfound vision will turn the tables of his entire life. Before, he was defined by what he needed, but henceforth, he will be defined by what he gives.

This blog is adapted from the just-released book Skin In the Game: Living an Epic Jesus-Centered Life.

Rick Lawrence is an author, ministry leader, and the longtime executive editor of GROUP Magazine, the world’s leading resource for the “Navy SEALS” of ministry—youth workers. He’s the general editor for The Jesus-Centered Life Bible (Fall 2015), and he’s the author or co-author of 37 books, including his newest, Skin In the Game: Living an Epic Jesus-Centered Life (Kregel).