31 Then the men who had gone up with him said, “We are not able to go up against the people, for they are stronger than we are.” 32 So they brought to the people of Israel a bad report of the land that they had spied out, saying, “The land, through which we have gone to spy it out, is a land that devours its inhabitants, and all the people that we saw in it are of great height. 33 And there we saw the Nephilim (the sons of Anak, who come from the Nephilim), and we seemed to ourselves like

I’d like you to keep a question in the back of your mind, as it will be important.

That question is “What is God calling me to do today?”

What are the replies that we give God when we encounter that test of faith? Is it often a “I know you’re calling me to do x, y, or z, but..”? There are a few ways that we can answer God allowing our faith to be tested, We can:

A) Do what God called us to do

B) Question our ability

The first answer is the right one. The other responses are a “But” problem. Excuses, we all make them. The High school football coach in a town where I served many years ago was coined saying the following phrase – of course, sanitized for church consumption.

“Excuses are like arm pits. Everyone has one and they all stink”

We can think of so many excuses for not doing what God is calling us to do. The story of Former NFL player and Head Coach Jeff Fisher exemplifies this. This is a man that has been SOOO close. In 2000, Jeff led a Tennessee Titans team to the Super Bowl, staged a comeback against the “Greatest Show on Turf” St Louis Rams (call me biased, but that sounds sooo much better), and called a play to the end zone on the final play of regulation, down 23-16. They make it in, they are champs. They got it to the ONE YARD LINE. He has never coached a team that has gotten even close to the Super Bowl since. 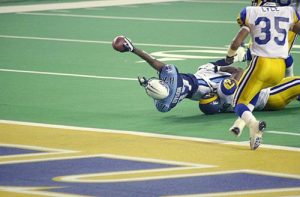 This is where the Israelites were. They are right there. They can walk in with no resistance, following God. But they stop short before going in. God has told the Israelites to go into the promised land, take it its yours. But they choose to question their ability, God’s decision, and God’s ability in one fell swoop. They already even knew the land was “flowing with milk and Honey”, as God had already told Moses in Exodus chapter 3.

They send in the spies. They had no reason to, other than fear or doubt.

The news the spies brought back was something out of what we would see on today’s news. A little bit of good news, overshadowed by fear, uncertainty, and overall negativity. “A land flowing with milk and honey, just like God said… However,…. Then all the negative comes into play. In his commentary, Dr Guzik has this to say about the word “Nevertheless”:

Nevertheless: “nevertheless” means “despite all of that.” At that moment, Moses, and every man of faith in Israel should have cried out and said, “Nevertheless nothing! How can one say, ‘We went to the land, found it good, and God’s promise true,’ and then say, ‘Despite all this . . .’?”

The Israelites were already beaten in their own eyes. They heard the report and quit.

God has big plans for small churches, do you believe that?

According to research from Thom Ranier:

90% of the churches in America average less than 350 in attendance.

According to The Barna Group, the average Protestant church in the United States is 89 adults.  So while most people call them small churches, in reality, they are “normal sized” churches.

We get stuck in that “bigger church is better church” mindset. Small Church pastor and Author Karl Vaters calls this the   “Grasshopper Myth” :

It holds small churches and their pastors hostage to the debilitating poison that they are less than merely because their church is smaller than. And it stops many of them from enjoying and releasing the blessings of being a healthy and healthful small church.

Changing this thinking gives you a better view of the landscape of your community and what you can do to reach that community with the hope contained in the Gospel. It makes us more prepared to face what we will encounter as we carry forward the work of the Ministry God has called us to.

That ministry may look larger than what you can handle, but if God has called you, He will equip you or partner you with others with the same calling.