My 4-year-old was 40 inches tall exactly.  I know.  We measured her before we left on vacation.

Why is that so important?  A lot of the bigger Disney World rides have a 40-inch requirement.  As a dad, I was excited because I could take my daughter on them.

Or so I thought. 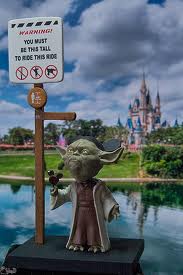 That excitement lasted until I went to board the Star Tours ride.  With my daughter in tow, we came to the fast pass line only to be stopped by a Disney employee.  She needed to meet the requirement, something I was confident she would do.

She needed to be taller than 40 inches.  My daughter was 40 inches exactly.  Her head touched the wood stump for admittance.  The problem was she needed to be higher than the bottom of the stump.  She was literally centimeters too short.  She didn’t get to ride the ride.

Disney has these rules in place for a reason:  safety.  If a child is not tall enough to ride the ride, they would come loose from the restraints and hurt themselves.  Disney doesn’t want that to happen, so they put limits on younger children riding attractions they aren’t big enough to ride.

In youth ministry, this has great application.  There have been times in my ministry when I have been tempted to allow a younger sibling to come or promote a group too early.  Each time I chose to stick to my age requirements. (I’m a strict 7th-12th grade youth guy, but that’s a different topic.)  I did it for a reason.

A few years ago, I started at a church with three students in youth group and two of those had just finished fourth grade.   Cutting them from the program would effectively give me one student, but that’s what I did.

Why did I cut them?  They simply were too young for the ride.

Physically, there were smaller and not ready for youth rough housing and games.  Mentally, they were two grades below.  Emotionally, they were not ready to handle teenage drama.  Plus, in a culture where teens generally check out of youth after four years, allowing younger students in can only increase their boredom and hasten their exit.

In a phrase, they were not ready.

Disney knows there has to be limits to who can ride their rides.  It keeps them safe and creates anticipation for their next Disney visit.

At same time, as a youth ministry, we have to have limits too.  It keeps students safe and creates anticipation for their own entry into the youth.