This weekend, my wife and I are on a scouting trip for the missions team at our church. We are in Rochester, New York, with a pastor that ministers to a church plant founded and full of Bhutanese refugees that have been relocated from Refugee camps in Nepal and India to the US by Catholic Charities. There are approximately 3-5000 in the Rochester Metro Area, and many thousands more in other parts of the country, such as about 10,000 in the Atlanta area.

We got to meet with one of the Bhutanese pastors at the Plant yesterday. His family was brought to Christ by the efforts of William Carey in the village in India where this man’s great grandparents lived. His grandparents were some of the first Christians in Bhutan. His father died as a martyr for the faith there.

This young pastor planted 11 churches and a Pastoral training center in the Bhutanese refugee camps before coming to the US. He turns 35 this year. This young  pastor was one of the first 5 Nepali-speaking Christians in Rochester. He voluntarily relocated his family there, because there was no Bhutanese pastor in the area.  There are now between 200-300 Nepali-Speaking Christians. 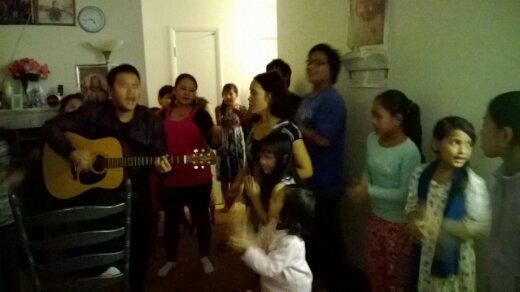 We were taken to a “Home Fellowship Meeting”. The best way I can describe it is how I would envision a house church meeting in another country. We were taken to an apartment in a Government-Assisted housing unit in downtown Rochester, where we entered an apartment packed with Nepali speaking people. There were probably 40 in a 15×10 living room praising God, reading scripture, and one young man shared a message from the Bible. He spoke for a couple minutes in English, then repeated the thought in Nepali. It was amazing. This man works as a translator for one of the hospitals in Rochester to translate Bhutanese patient care needs to English speaking medical personnel.

There was so much that we experienced. Pray for the refugees as they adapt to the changes they face by being relocated to a new country and culture.