Yesterday, I had an experience that I would not soon forget. As part of Lead The Cause University, I went with the 266 (or so) other students and leaders to Columbine High School in Littleton, Colorado. We were briefed in what we would see, in what happened. Many in the room were too young to remember. I was not. I remember watching the news reports. I was at a Community College in Southern Illinois at the time. It was about a year before I accepted the call to youth ministry.

Once we were there, the feelings all came back, the raw emotion of the spiritual darkness I sensed there. We did a prayer walk around the campus. When we approached the west entrance (where the first shots were fired), it was almost more than I can handle. Then I felt a still small voice telling me “Am I not big enough to overcome the events that happened here?” “Am I not big enough to bring a revival to this school that is so large that the revival will be what folks remember, instead of the shootings?” — Yes, God. Yes you are.

Then came the next question “Am I not big enough to bring revival to where you live?” — Yes God. Yes you are. 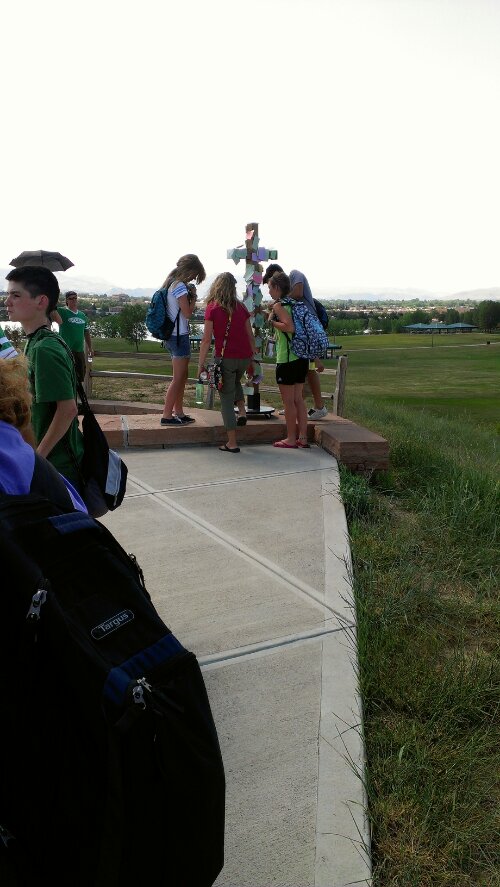 I was also affected by hearing the story of the wooden crosses. In the days following the massacre, a man erected 13 wooden crosses on “rebel hill”, a hill that overlooks the school at an adjacent park. (it is now the “overlook” at the Columbine Memorial). One cross for each person killed that day. The county demanded that he cut them down. He did. He gave one of the 13 to Dare2Share several years ago. Yesterday, for a brief time, It was able to be returned to its original home, carried there by students. We were able to nail our cards of committing to be “all-in” about making an impact on our campuses and praying for revival in our communities. Greg admitted that he was at first hesitant to have us nail into the cross, then he was reminded what crosses are for – having nails driven into them.