The title of this post sounds like an oxymoron, but it is becoming a real problem. It has been for a while in parts of the country. Unfortunately this problem hit a little too close to home a few years ago. 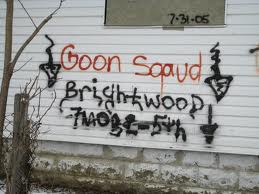 I grew up in a small town in Southern Illinois. You never really heard about gangs, except for the evening news in St Louis, 65 miles away. No one ever thought of that kind of thing happening in our small town, until 2010. There were a group of white teenage boys that were social misfits that decided they would form a gang they called the Pville Saints. During the process of this formation, they targeted a 15 year old girl, broke into her house and killed her by strangulation and gunshot, and dumped her body in a creek. they later came back and weighted the body to sink. It rocked the small county to think that something as brutal as what those young men did could happen in a small, seemingly safe rural community. (Here is more info about this particular case…)

There is not much info out there about Rural Gangs.

Here are a couple of great resources:

The Village of Coal Valley, Illinois Police Department has some good information as well

What is going on in your community? Are there signs of gang activity, even though you are in a small town?