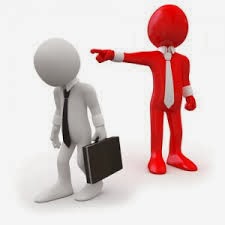 A few years ago, someone came to me for advice about her job.

Karen, a long-time employee of the company, was having personality and philosophy conflicts with her new boss.  He’d been there less than a  year and within six months, the relationship soured.

Personality-wise, they clashed.  His leadership style did not fit Karen’s personality.  As a business philosophy, they were on two different pages.  From the way she described things, it became obvious that Karen, and her years of experience at the company and her relationship with her co-workers, intimidated the new boss.

First of all, this arranged business relationship wasn’t working.  Stress-levels kept increasing, productivity decreased and morale, at least for Karen, spiraled downward.  Each conflict grew more severe than the last.  Karen was at her wit’s end.

The second thing that became apparent – at least to me – was that this was not going to end well.  The boss had just been hired.  Karen, though a long-time employee with a great track record, was further down the corporate food chain.  When push came to shove, I knew where management would side.

So I offered my advice.  I implored Karen to stick it out as long as possible, but to begin looking in earnest for another position.  I wanted her to have something else before it was too late.

Karen, though, resisted.  Changing jobs likely meant relocating, and she loved her job, her community, her co-workers and her friends.  She didn’t want to move or start over, despite the issues she had at work.  So despite saying she would consider my advice, she never put much effort in finding new employment.

Every few weeks, Karen would check-in.  There would be weeks of uneasy peace followed by a major blowout.  Each time, the peace got shorter and the blowout grew worse.  Each time, I repeated my advice.

Finally, my prediction came true.  Months after first approaching me, Karen saw the inevitability of the outcome.  After having never really searched for a job, Karen found herself with no other option but to resign.  She struggled to find work to pay the bills, taking several jobs below her education and pay level while she continued to find another job.  In the end, she took a similar job in a new town, but it was far from ideal.

If she had only listened to my advice, perhaps things would have been different.

That’s exactly what Paul experienced in Acts 27.  Facing a perilous journey across the sea, Paul implored the centurion to wait until spring to sail.  The centurion ignored Paul’s advice and the crew found themselves shipwrecked.  If only they had listened to Paul’s advice.

Too often we ignore Godly advice to pursue our own agendas.  When we do things against God’s direction, if often ends up in poor results.

The key is listening when God speaks.  He speaks through his Bible and through prayer.  He also speaks through Godly influences in our lives like pastors, Christian friends and mentors.  When these people speak, we need to listen.

If not, we might end up shipwrecked or fired.  Neither of those are good options.