Newsflash, IBM no longer makes typewriters. HP has (mostly, we think?) killed off their mobile device/WebOS division. Both have taken bold steps in the last several years. They have let go of things that do not fit their goal (making money).

We can learn a lesson from this in the church.

I remember as a very green PC Technician working to repair IBM Aptiva Computers. They were terrible. The manufacturing was not good. They were horribly overpriced. It didn’t take IBM long to figure out that it took more than the IBM name alone to sell computers in an increasingly Dell and Gateway market. They needed quality to match the name. Enter Lenovo. IBM figured out that Lenovo had much better quality at a cheaper price, and they could put the IBM name on it. That worked. For a while.

As profit margins became ever thinner, IBM finally sold the PC division to Lenovo for a large chunk of cash, hence making them money, which was the goal all along. Was that the route they originally had in mind? No. They had to be flexible. Yes, even IBM has the ability to change. 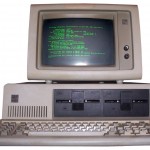 So what does it mean in the church?

In the church, we have to be increasingly aware of what is working and what isn’t. Are we using the resources that we have been entrusted with to make gains that look successful on earth, but have little or no kingdom value? Are we continuing ministries that worked 5 or 50 years ago “just because”? Have we put in so many levels of committees and administration that it takes ridiculous amounts of time to get small changes to ministries approved?

IBM has dropped things that do not fit their goal (making money, remember?). They now use the lion’s share of their resources to do a very few things – making and selling servers, installing and maintaining enterprise computing equipment, and enterprise level software.

We have a different purpose.

The church has the goal of spreading the message of the Gospel, making disciples, and teaching them what Christ has commanded (see Matthew 28:18-20). We need to be willing as churches to jettison anything that does not fit the purpose of glorifying Christ. Whether it is programs, buildings, activities, or the donated carpet, anything that stands between us and completing Christ’s purpose for us needs to go…