I had a first in ministry today. A cat as a visitor to the congregation. 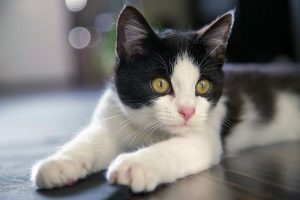 several kids and a few cats.  Often when I come on Sunday morning, there is a black and white cat that roams around the front yard of the church that looks similar to the one pictured. The last couple Sundays, the weather has been really nice here in Indiana, so we have left open the east door of the sanctuary.

During the offertory, the cat comes up to the open door looks in, sniffs around, and goes on its way. Where I was sitting behind the pulpit, I was one of few in the building that saw it.

About 20 minutes later, during the middle of the message, the cat comes back and walks through the open door, across the front of the sanctuary and into one of the rows of pews. I go on preaching, and then one of the guys in the pews gets up to go catch the cat, trying to call it as quietly as possible to avoid disrupting the service. It goes under a row of pews, then circles back to where the pianist is sitting and comes out from under the pew, rubs against her leg, expecting to be petted. Instead, she picks the cat up and takes him back out the east door and proceeds to shut the door. The whole time all this was going on, I’m still preaching. Trying not to just lose it and die laughing.

it could have been worse.  At least it wasn’t a squirrel.