One of our new Advertisers, Vinci Genius has sent MinistryPlace.Net an early Christmas present! 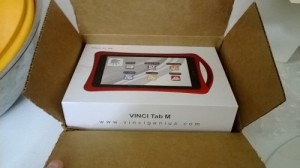 Vinci is manufactured by a company in Canada named Rullingnet targeted toward children and parents of young children (under 9). The goal of the tablet is to provide a solid e-learning platform for the children. Will the unit live up to all it is billed to be? Will it be a great resource for Children’s and Youth Ministry? Read on to find out…

I was pleasantly surprised to see my review unit sporting Android 4.0.4. This means some updates from the original version of this tablet that debuted in 2012. In the box you get the tablet (with the attached silicone bumper case) the charger, and a quick start guide. The setup was pretty similar to about any other Android device in setting up your Google Account (more on this in a bit) and loading any other app store of your choice.

Overall the quick start instructions were very good. They gave enough information that someone not familiar with Android OS could get going. They also highlighted the ever-important “how to get out of kid mode” default password.

Size and Build.
I have worked with tablets and hybrids of various form factors. from 7″ Tablets up to a 12.1″ Dell Latitude XT that we use in our youth department. This device with its 5″ screen falls in a odd place for me. It’s bigger than my phone (a 4″ Nokia Lumia 521), but smaller than a 7″ Tablet. This size strikes you first as a “what do I do with it?” progressing to looking at its intended purpose. This is a device I see as a great size for smaller hands (like my 4 and 7 year olds) and something that mom or dad can easily slip in a bag while on the go. That looks to be its sweet spot. The integrated Silicone Rubber bumper case reinforces the “on the go” mentality with a built in handle that looks to be pretty durable.

Its build quality overall looks… ok. When you compare it to a device costing much more than its $129 price tag, it is obviously going to come up short. It is not an iPad Mini, a Kindle Fire HD or a Nexus 7. It does not have the screen resolution, processor, or memory to compete in that realm. This is not designed to be dad or mom’s tablet. It’s Junior’s. It has enough horsepower to run most any android app or game you would want to throw at it (more on performance in a bit). Based on the target market and price range, I see it as average to above average in this category.

Vinci Support
When I first set up the tablet with my Gmail account there were some issues with Google Play not letting me install apps. A couple quick emails and a factory reset, and all was up and going. I sent a quick email to support and had an email back from an engineer within about an hour. They also have phone and live chat support available. The knowledge base articles were fairly extensive on this model in the online support.

The Vinci Software
The folks at Rullingnet were kind enough to send a package of their Vinci Curriculum packs as well for this review. As a homeschool dad, I am interested in tech that is going to help my children master the foundational concepts in education. Their software goes beyond the horizons I am used to, as it reaches down to even 18 months to help toddlers develop in categories such as Social, Language, Mathematics, Knowledge, and Thinking. Levels 2 and 3 add in Science as well (2.5-5 years). It is evident that thought and resources went into the software in using it. As a 34 year-old man, the software looked REALLY childish (as it should), but when I handed it to my 4 year old daughter, some of the upper Level 2, and Level 3 apps just captivated her, and she had fun while learning. Well done. I will tell you that, unless the software is purchased bundled with a device (which can be purchased at some reasonable price points), it is quite pricey, as even the single app purchases can be as much as $8.99 each. However, Vinci has created a curated app store full of their titles with the following promise: No Adult Content, No Violence, No Commercials, and No In-app Purchases. This approach buck the trend of all major app stores today, and I applaud them for thinking outside the box here for the purpose of educating children. 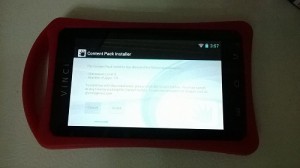 The other point where Vinci does some interesting things is the launcher. The launcher has a parent mode and child mode. It is implemented well without need of other apps to accomplish the need for having some apps for parents, some for the children.

Performance
The Vinci Tab II M that I am reviewing has a single core 1.2Ghz cpu from an un-named company, 8GB of onboard memory, Dual cameras (Rear is 3MP). and a MicroSD card slot. I was not expecting the performance of a lot of the much higher priced tablets here, or even high end tablets of a couple years ago. That is not the target of this tablet. It is basic and childrens apps.

Conclusion and Ministry Implications
Overall, I was pleasantly surprised by the device, once I put the device in the hands of its target audience – a pre-schooler. I could see this device as a useful addition to a children’s or youth ministry in the proper context. It’s simple device that you can make access to a few apps available whether from the app store of your choosing. It doesn’t have a lot of the bells and whistles. It runs YouVersion (The Bible App) very well. It gladly ran any app I threw at it. I could see it as a great resource at a reasonable price for use in ministry.