Her journey has required time, sweat and sacrifice.  It’s not easy to shed pounds.  It takes carefully planning out meals and calories. 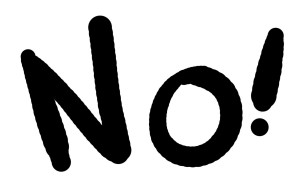 I was reminded of that this weekend when we attended a child’s birthday party.  Inside the house lay a spread of delicious food.  The host, as well as many of the guests, offered her food numerous times.  They asked, then insisted, then made light-hearted jokes about her not eating.  Eventually it entered an awkward stage when she simply refused to sample the cuisine.

This is not the first or only time this has happened.  Two weeks ago, she ignored pleas for her to cheat at a cookout at my father’s house.  Each Wednesday she brings her own food to church instead of eating the meal cooked for the congregation.  She often skips the cake at work and social celebratory situations.

In our culture, it’s considered rude to turn down food from a host.  However, my wife has had to be rude for the greater good of her goal.  She knows to say “yes” may please the host, but will hamper her chances on the scale each week.

In short, my wife has learned the art of saying “no,” even in socially unacceptable situations.

As youth ministers, we could learn a thing or two from that.

In our church cultures, as youth pastors, we sometimes are afraid of saying no.  We want to please the congregation, the nice lady who bakes cookies for trips or the adult volunteers who always show up to drive.  When they bring us ideas (some good and some way out in left field), we feel the pressure to say “yes” and take on a project we don’t have time for or simply don’t want to do.

Sometimes, for the greater good of ministries and families, we need to say ‘no.’

Now, that doesn’t mean you reject every idea outright.  I’ve had several people present great ideas that have worked well for our ministry.  It does mean you evaluate each idea and then accept or reject it on merit, not on whether it’ll hurt someone’s feelings.

A piece of unplanned cake can lead to no weight loss on the scale.  An unscheduled project can lead to lost time and effort in your youth ministry.

Learn to say no.  Your family and ministry will thank you.