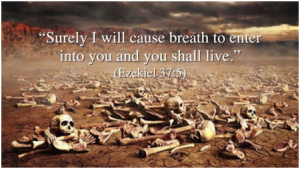 This passage occurs just after the Jews were taken into exile in Babylon. There were some left in Israel. Ezekiel was a prophet that spoke to the condition that God’s chosen people were in. As we go through this passage that is familiar to many of us, I would like us to look at this passage with fresh eyes, looking at how what God is telling Ezekiel to share with the Jews applies to us thousands of years later and thousands of miles away.
The Jews were beaten down and without hope, after the Babylonian army had decimated life in their cities and towns, taken away their best and brightest, and left the remnant to survive as best they can.
I love how the Bridgeway commentary sets up the narrative in this passage:
With Jerusalem destroyed and the people in exile, Israel’s national life had come to an end. To Ezekiel it appeared as if a great army had been slaughtered in battle and the bodies of the dead left to rot in the sun. All that was left was a lot of dry bones. Israel’s condition appeared to be beyond hope (37:1-3).
God now promises Ezekiel that he will do the impossible. He will bring Israel back to life – as if he brings the scattered bones together, puts flesh on them and breathes life into them. Dead Israel will become a living nation again, but only through the direct creative action of God (4-10).
God gave a picture of a nation without hope.
A vast defeated army that’s bones have been left to bleach in the valley, desolate. God asks Ezekiel if the bones can have life again. It was just as unlikely as the Jews coming back to Israel. Ezekiel knew it wouldn’t happen on its own. He also knew he served the God who created everything. John Gill described the situation in his notes like this.
the prophet does not pronounce at once that it was improbable and impossible; he knew indeed it was not probable, or possible, that these bones should revive of themselves; and he knew that neither he nor any creature could quicken them; but he wisely refers it to an omniscient and omnipotent God, who knew what he could and what he would do
There was maybe even a feeling that it would be more likely that the bones could live than the Jews return from Babylon, even though it had been prophesied that they would return in 70 years.
Coffman draws this comparison in his commentary
The return of any ethnic people from the borders of any conqueror who had captured and deported the whole people would have been viewed throughout the world of that era as a totally unimaginable and impossible happening. Under the will of God, however, it occurred; and nothing could have any more appropriately symbolized such a development than does this vision of the resurrection of a valley of dry bones.
In a few ways, this relates to what we see in Rural America today. Not in a captivity and death sense, but with a phenomenon called the “Rural Brain Drain”, Where a large portion of our young adults go off to college elsewhere, and then to a city somewhere for work, not to return. A factor in that is much of the employment and new industries in our country has shifted to urban and suburban centers. Many rural communities have given up hope. They see increased poverty, increased unemployment, reduced opportunities and services.

In verses 7-10, we see God’s work, in His divine order. He puts them back together bone to bone, adds muscle and flesh, raises them to life and then adds His spirit. We serve a God of order. He created all we see and don’t see with an order, see Genesis 1-2. He created us to live with Him in that perfect order. God is not a god of chaos. He is a God of order. Chaos enters the picture with sin. Sin entered when we disobeyed God’s one guideline He set for us in the garden We see that in Genesis 3. It separated us from Him. The rest of the Old testament is the law given to us to show us our sin and that they cannot be removed by good deeds. Ezekiel 37 is a view of the culmination of that. A broken people that have strayed far from God and suffered the consequences of turning away from His will.

That is a life that starts now and lasts forever. It’s not a “someday” relationship. It’s one that is current and growing in every believer. As we grow in our relationship with him, we tell others. It’s a part of human nature. We have a good experience at a restaurant, a car dealer, or something else, we tell others. The best definition that I have ever heard for evangelism is “one poor blind beggar telling another one where they found food”.

This is where verses 11-14 bring hope. God tells Ezekiel that regardless of how bad things are, the Jews were still God’s people and He had not given up on them. As followers of Christ, we are grafted into that tree of life through Christ. . God’s redemption is for us too. As an extension of what is in these verses, they apply to us as well. God will not give up on us. We will come up from our spiritual graves when we trust in Him. He will lead us to where He wants us to be and we will trust in Him.

This is the message that needs to come from us. That we were all once dead in our sin, but God spoke to us and gave us His grace and mercy and gave us new life in Him